I have to be honest and tell you that some days it’s quite difficult to face a 5K. 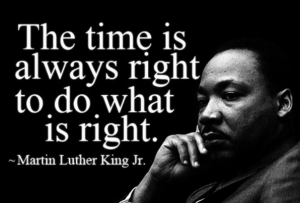 A nice, warm MLK Day is quite rare here, so I’m glad that the parade participants and attendees enjoyed a non-freezing, non-precipitating weather day. I’ve seen MLK Day be far less than pleasant with sleet, cold rain, wind, and even snow. The faithful still show up.

For Melissa and me, the day called us outdoors too. We walked our neighborhood, albeit slowly, but we did it. Again, there’s no competition for time–just completing the 5K is the goal.

I have to be honest and tell you that some days it’s quite difficult to face a 5K. I think, “We can’t miss one and it’s only 45 minutes or so. I have this and I have to do this.”

Don’t give up. If you skip a day, then it will be easier to skip another and another, until you’re no longer participating in any kind of challenge at all. Make a commitment and stick to it. I’m always glad when we’re finished and I’m always glad we did it. Another day’s 5K in the books.

Melissa and I both observed that walking in the neighborhood seems easier and quicker than walking on the gym’s track or on the treadmill. It’s no faster or different in time, but it feels different. It feels better to be outside. A few days ago, when I did my 5K in 30-ish degree weather, it was still better than being inside on that track or on the devil’s conveyor belt (treadmill).

In honor of Dr. Martin Luther King, Jr.’s Day, I’ll tell you a little story. A few years ago, Melissa, our three kids, and I went to Memphis, Tennessee for a short vacation. We visited their impressive Zoo and some place that had an outside scale model of the Mississippi River. We walked all around the old downtown area, the Beale Street area, rode a Trolley car, went to the Peabody Hotel (The duck place–look it up), and had some awesome food and drink.

We wandered around and turned a corner only to see the Lorraine Motel, where Dr. Martin Luther King, Jr. was murdered on April 4, 1968. To say that it was a shock to my system is an understatement. I never thought I’d see it in real life. Melissa and I both kind of gasped at the sight of it and had kind of a long, silent moment of being stunned at standing within a few yards of the motel. I have to say that you don’t really know how you’re going to react to something like that until you see it for yourself.

This challenge is something that Melissa and I thought up a few days ago, while preparing for Christmas dinners, visits, and family time. It's not part of any official challenge nor is it a New Year's resolution. It's our own personal challenge to do something that is healthy and awesome. Feel free to join us in this challenge. You can start at any time. Remember to use the #5kaday2017 for all your social networking posts.